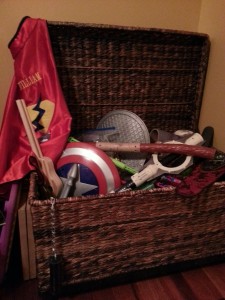 Here is our arsenal. We are so ready for the zombie apocalypse.

Right now six little boys are running commando through my house.  Wait a second.  Scratch that.  Running around pretending to BE commandos.  Phew.  I was going to get in trouble there.  A special ops battle rages complete with sticks, plastic weapons, more sticks, and the occasional cape (commandos need capes).

How’s the saying go? Boys will be boys.  The longer I mother these wild-child mini-men the more I understand this saying.  The Y chromosome doesn’t excuse bad behavior; but, how I define “bad” behavior is evolving. As these maniacs run through my kitchen armed for mass warfare, the pre-mother me would be putting on her judgey pants right now and mentally lecturing me on the perils of letting little boys play with weapons.  The first-time mom me would be anxiously hovering, cringing at every yell and stomp and boom – convinced that at any moment someone was going to poke an eye out or lacerate a spleen or liver or something else equally vital.  But the today mom me, the mom of two Elementary school boys (Dude, how did that happen?!), is all like “Kids, don’t bleed on the carpet! K?” and saying absurd statements like “Boys – these are your rules of engagement. You are only allowed to kill each other in the living room, basement or outside – okay? And avoid the eyes – you have school tomorrow and need to see.  Other than that – we’re cool. Now go pillage and plunder while I drink my tea.”

I’ve learned that boys need the freedom to be… boys.  They need to have space and time to be loud, rowdy, messy, dirty and stinky (and, oh, this crew is stinky today).  They need adventure.  They need to be heroes and fight bad guys.  Yes, this does mean my perfectionistic self needs to calm the heck down when it comes to a dirty and sometimes (okay, often) chaotic house.  The evidence (carnage) of their battle is all over my house (the one I just cleaned).  And, yes, I will make these warriors clean up the ammo and weapons, but the footprints, sand, leaves and the occasional stick will remain.  Let’s call it acceptable collateral damage.

Why do I put up with such shenanigans?  Why do I allow the neighborhood into my home for their version of WWIII?  For one, I love it (when I don’t have a migraine that is).  I love the funny way they pig pile on top of each other like puppies.  I love the superhero capes that fly by me as they save the world.  And I love to sit back and watch them figure out how to do relationships.  There are fights, hurt feelings, encouragement and teamwork.  If I manage to resist stepping in when they start to fight or when tears come (and, man, do they come – little boys are after all… little), most of the time they figure it out.  And each time they do they are that much closer to being responsible young men.

Before they take on the responsibilities of manhood, I want them to be little boys and feel like superheroes.  Embrace their inner warrior while also learning compassion and cooperation with their fellow brothers in arms.  I sincerely believe these battles are the work of boyhood.  They aren’t just something to tolerate but something to celebrate and enable.

So I will sit here and sip my tea while the war rages on and celebrate this time.  It’s precious time.  It will be over in an instant and soon my mini-men won’t be so mini anymore.  And I will wistfully remember The War of November 4, 2013.

Battle on my little warriors.  Battle on.

Verse of the Day

“Should we feel at times disheartened or discouraged, a simple movement of heart toward God will renew our powers. Whatever He may demand of us, he will give us at the moment the strength and courage that we need.” ~Francois Fenelon
Loading Comments...
%d bloggers like this: